You hold in your hands a spellbook … it holds not poems but spells of many kinds that might just, by the old, strong magic of being spoken aloud, unfold dreams and songs, and summon lost words back into the mouth and the mind’s eye.

From The Lost Words by Robert Macfarlane and Jackie Morris

The Lost Words is a magical book. The spells it holds are spells for conjuring back words that are disappearing from the language of children. But its magic works deeper and further than that.

Time and again, the people who encounter it are bewitched – by Jackie Morris’ sumptuous, gold-scattered illustrations; by Robert Macfarlane’s wondrous weaving of words, and by the treasures of the more-than-human world to which they both point.

This week it seemed that Vernon Oak’s efforts to give a copy of this book to every primary school in Sheffield were also enchanted.

Vernon’s crowdfunder was 50 per cent funded after just 48 hours. Within a week it had passed the 70 per cent mark!

As Vernon’s agent, I contacted him for a reaction to this magical progress.

JD: So, Vernon, how do you feel about the way the crowdfunding is going so far?
Vernon Oak: I am thrilled! It started like this:

VO (continued): It’s been a wonderful surprise to see how the fund has been growing: the comments left by so many supporters show that the campaign has really captured people’s hearts and imaginations. Jackie Morris says that the book is ‘a hymn of praise to the wild around us’. I think that’s important: it’s the ‘wild around us’ – encountered by people every day in their cities, towns and streets – which is precious to them.

That’s why it makes sense for a threatened street tree to have launched the campaign.

It’s been quite an exciting week too, not just because of the success of the crowdfunder, but also because we also heard that The Lost Words was joint winner (with Angie Hobbs’ The Hate U Give) of the Children’s Book of 2018 at the British Book Awards.

Some of my friends  had a celebration tea party to congratulate Robert Macfarlane and Jackie Morris as very worthy winners, and I provided the backdrop and the shade.

Jack the dog was wearing a heart with the message ‘I love Vernon’s bark’. Dogs are among my most active supporters.

JD: What a huge amount of support you have, Vernon. I think  it’s be good to remind readers of why you need it, too. Back in 2017, I wrote about how Sheffield Council had decided you should be felled as part of their highways maintenance programme. A lot’s happened since then. Six of your  beautiful lime tree friends in the next road have been cut down, for a start. Can you tell us where things stand with you at the moment? Are you safe from the chop?

VO: Afraid not. My supporters are waiting to hear whether Sheffield City Council is willing to accept an offer of help from the charity Trees for Cities which could save me. The Woodland Trust is also fighting my corner.

But at the moment, Vernon’s still on the list for felling.

I’m afraid Chatsworth Road looks very empty without the beautiful Duchess Lime and the other five limes. Our annual summer visitors, the swifts and house-martins which feed on the insects there, have just arrived. Now there are only six lime trees left on the street, I hope it doesn’t mean half the number of insects for them. And there’s the night shift to think of too – the bats. I hope there are enough insects to feed them all.

There was some extra hopeful news this week, though. I had a wonderful surprise when Robert Macfarlane left a comment on my crowdfunding page. It seems that he’s writing me a special spell of protection!

JD: Let’s hope that even more of The Lost Words magic comes your way, Vernon. Finally, there’s just one more thing I wanted to ask you. It seems that in the past, I’ve made a terrible mistake by referring to you with the pronouns ‘he’ and ‘him’. I’m truly sorry. Can you explain why this is such a blunder?

VO: Thank you for asking that, Jo, it’s an easy mistake to make, particularly since my name sounds masculine. My name is a mistake. I was named after the road even though I was growing here first. Really, the road should have been named after me and the road should have been called Oak Tree Close or Quercus Robur Road. However, it didn’t happen and I ended up being called Vernon after the road. I’ve learned to live with it.

All oak trees are both male and female at the same time; parts of us are male and parts of us are female. We’re monoecious: it means we can produce acorns even if there aren’t any other oaks nearby. I suppose it doesn’t really matter if you call me “he” or “she”, you can think of me as either, or both.

JD: Thank you very much for that, Vernon – and for teaching me a new word!

I leave you with this beautiful picture by Jackie Morris. Written in her unique otter alphabet, it reads LOVE, and she very generously donated the money from its sale to Vernon’s campaign. 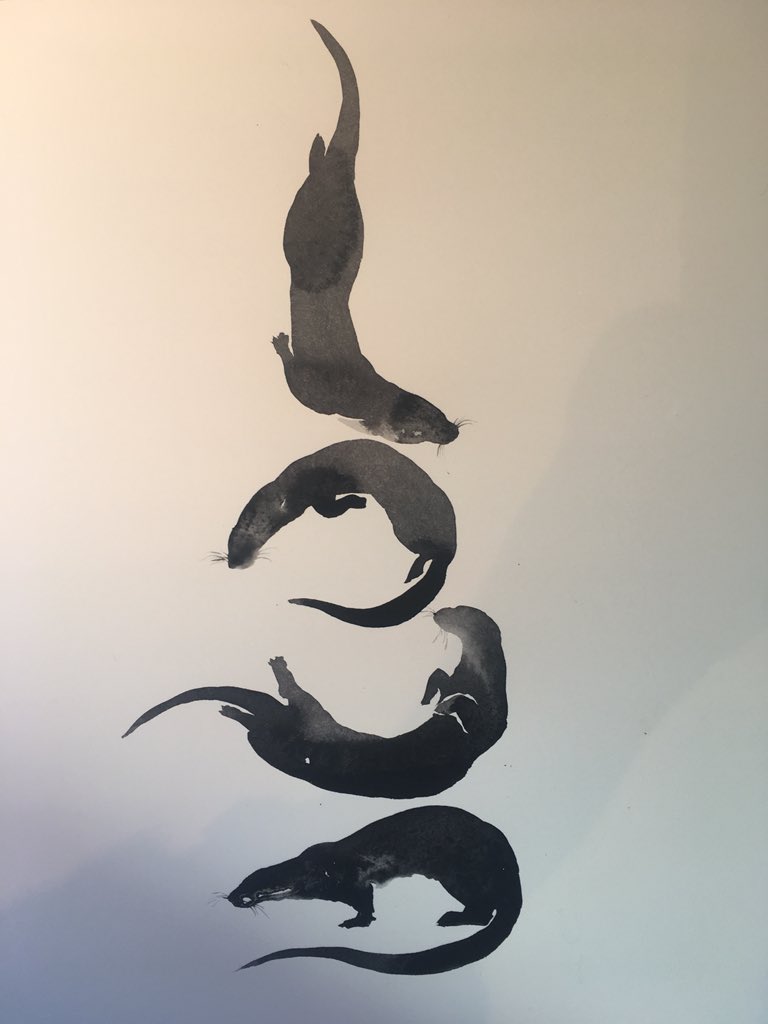 You can donate to Vernon’s crowdfunder here. Despite the wonderful early response, £1,000 is still needed to hit the target.

What’s more, Vernon and team are starting to dream about what might be possible if the target is exceeded: more books and more magic for more places in Sheffield, perhaps? An even bigger counter-offensive of joy and creativity in the face of the ongoing threat to the city’s street trees.

Many thanks to everyone who has backed Vernon’s crowdfunder so far, and thanks to the organisations supporting our efforts: Sheffield and Rotherham Wildlife Trust, and  their Teach Wild Network; The Woodland Trust; and Rhyme and Reason independent bookshop at Hunter’s Bar, Sheffield.

Many, many thanks to everyone who helped Vernon Oak raise more than £3,500 to give a copy of The Lost Words by Robert Macfarlane and Jackie Morris to every primary school in Sheffield.